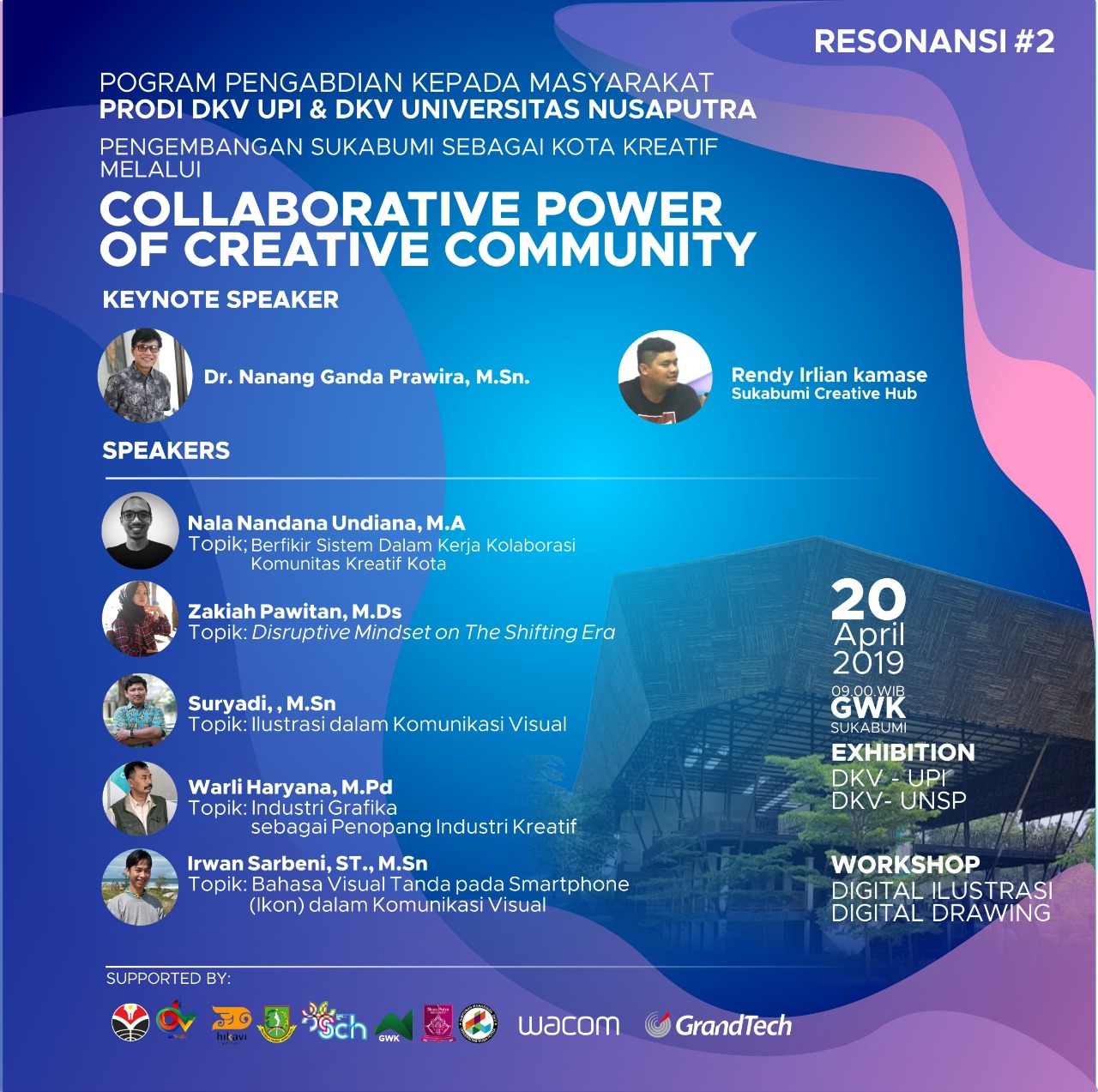 Department of Visual Communication Design FPSD UPI held Community Service Program (PKM) at Gedung Widaria Kencana (GWK) Sukabumi City (20/4). This program was carried out as DKV UPI support in Sukabumi struggle to embody the notion to be a Creative City. Under the theme of “Collaborative Power of Creative Community”, this program aimed to accommodate any creative communities existing in Sukabumi to get them gather and exchanging the sights as well as creative notions based on art and design, which could possibly create a symbiosis one another or play in collaboration to actualize Sukabumi being a Creative City.

Dr. Kurniawan, ST.,M.Si.,MM., Rector of Nusa Putra University stated that one of the competitive power in this 4.0 Era is the act of collaboration within the local creative communities. Iskandar, Sukabumi youth creative space Provider – GWK, also refer UNESCO statement which said that in the future, none cities would stand sustainably without defending or uplifting their culture – in this matter art and design are included in. As the first initiator of the Creative City notion Iskandar believes that Sukabumi could achieve that tittle through empowering and collaborating local artists and designers to reinvent existed local genius of Sukabumi. He showed Ciletuh-Plabuhanratu as the concrete example which has acknowledged earlier globally through UNESCO as National Geopark. In his optimist, if the glorious nature of Sukabumi could have gone global, why not with its local genius.

However, to achieve that target requires extra efforts and involving various components. To be a Creative City in the field of art, for instance, it does not mean we would empower solely local art communities, it is necessary to also involve the synergy of other creative communities out there as just what Bandung had done in its struggle in achieving the global acknowledgement of being Creative City. So that is what Sukabumi youth communities should go through today. This awareness was then what actually initiated Iskandar to provide open creative space which can muster any youth Sukabumi communities. Hopefully they can freely express their creativity, and even uncover Sukabumi cultural identity which can be introduced nationally and internationally.

PKM was divided into two different events including Seminar and Workshop, held simultaneously. The event was officially opened by the representative of Chief of Tourism Department Sukabumi. Dr. Nanang Ganda Prawira, M.Sn. as the Chief of DKV Department FPSD UPI began the main stage by defining the PKM DKV UPI projection, and the planning offer of long-term partnership program. Nanang also shared some motivations to all PKM audiences about the importance of collaborations within the creative community, government, business actor, and other stakeholders to achieve City’s vision. Further, Nanang suggested that finance should not have to be the obstacles in your creation development, for it would present itself in form of donation or sponsorship from any sources as your creation process growing. Nanang’s hope also went to any big companies existing around Sukabumi, they should and are expected to contribute good impact in the development of local art.

Seminar was lectured by three speakers of DKV Department, each with different subject focus but relevant to one another in scope of art and design. The first subject “Illustration in Visual Communication” by Suryadi Maskat, M.Sn. demonstrated the technics of illustration drawing which effectively could avoid perception bias of the audience or illustration viewer. 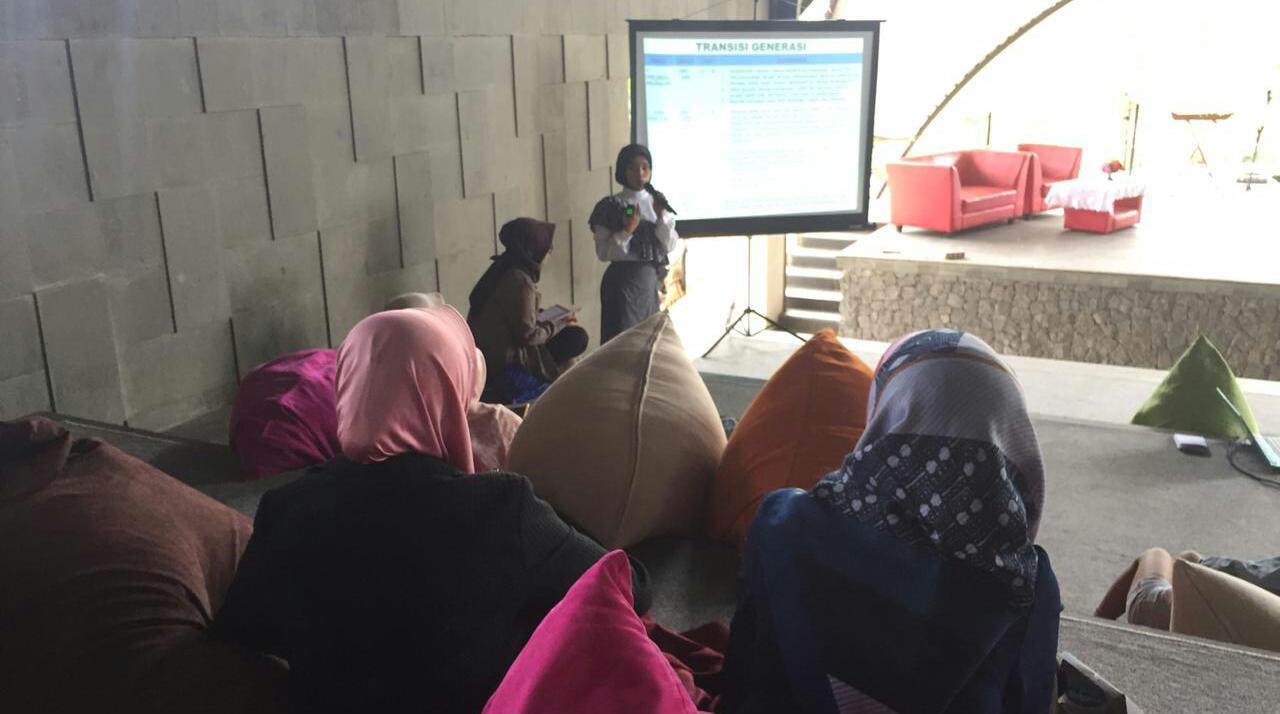 Secondly, Warli Haryana, M.Pd. under his topic “Graphics Industry as a Creative Industry Support”, share the sight about Indonesia Graphics Industry, and the Indonesian ideas of work that highly able competing other overseas artists. In this chance Warli shared some simple and applicable tricks on how to prepare and get involve in creative industry world. As an active designer of some projects in scope of national, he motivated participants for their creation of work: an artist or designer in millennial era is expected to be the control taker in the development of creative industry, do not let yourself stuck in the line of just user. Do not wait your excellence of tools and skill then you are just ready to show up. For him creative business idea need no beating about the bush, you could start it now, and from your around, without expecting high fee. The most important is that you could harvest appreciations and brilliant advices to keep you improving your works better, no matter how much fee earned from it.

And in closing subject Irwan Sarbeni, M.Sn. invited the audience to uncover the other side of design application set on smartphone or gadget’s Graphic User Interface – in form of icons collection – which is potentially able to stimulate user understanding through visual reference, up to the capability of icon’s visual language in influencing oral language behavior of its users that is merely happened out of their consciousness, such as icon visual language acquisition in the speaking practice both in Indonesian or in foreign language.

In another space, workshop was lectured by two speakers. First session Zakiah Pawitan, M.Ds. lead the workshop under the topic “Disruptive mindset on The Shifting Era”. The topic mainly discussed about the change of individual perspective or social group in reacting the change that is happened as the effect of digital world influence. Then, the use of digital media to help ones enhancing their creative economy applied in micro business or home industry. Nala Nandana Undiana, M.A. closed the workshop session by his subject titled “Thinking of System in Collaboration Work of City’s Creative Community”, which explained about how to do systemic thinking in reacting the complexity of city’s life. This thinking is kind of effort that one could do to achieve the understanding of an individual or community in the city, that in further would arise ideas which could contribute positive impacts from every activities carried.

The PKM went full-day and held in corporation between DKV FPSD UPI, Nusa Putra University as the host, GWK, Wacom Grandtech, Sukabumi Creative Hub, and Hikavi. Within the Seminar and Workshop, art and design work made by the local artists and designer were also displayed in the Exhibition as part of event program. (By: Irwan Sarbeni)